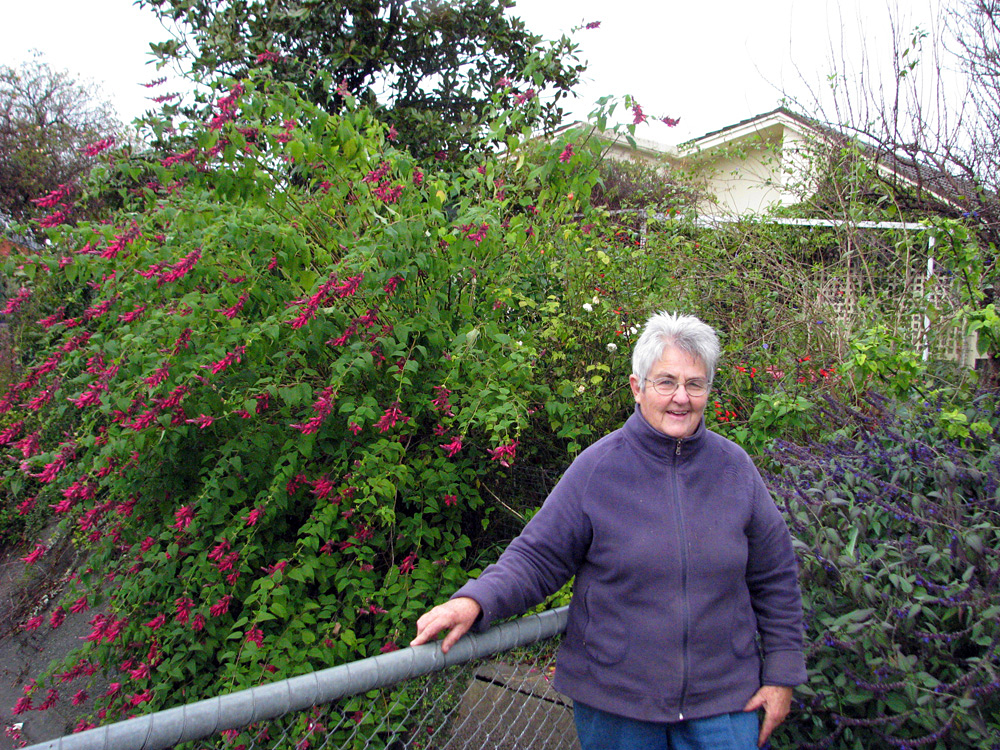 Photo taken by Anne Lenehan one cold July.  The blue salvia on the right is Anthony Parker’ and the tall pink one is involucrata x karwinskii ‘Winter Lipstick’.  The red just peeping through behind is salvia gesneriiflora.

I grew up in Sydney until I went to live in Munich and England.   Later my husband and I went to Chile,  via Alaska, as voluntary missionaries in 1970.  Interestingly we coincided with Communism and lived under nearly all of Allende’s government.  Our son was born in Chile but we came back to Australia for our second child.   We have lived in one house for 40 years now!

I was teaching shorthand to newspaper cadets which led into writing a paid gardening column for 16 years.   During that time I was asked to teach a herb class.  I used to pot herbs in cans, progressed to cottage plants, and finally specialised in salvias from 1990.  I have been mail ordering salvias since about 1993.

I began travelling again in 1989 and averaged going to the U.S. every second year until about 2003 when age and cancer slowed me down a bit.   I have visited salvia growers in South Africa, France, U.K. and U.S.  I was instrumental in suggesting an international salvia conference in 2008 and 2013 in California when I was able to meet a few more salvia enthusiasts I hadn’t met before.     I was fortunate to be able to join an expedition from the Guadalajara University looking for salvias in Jalisco, Mexico in 2013.

Betsy Clebsch, Ginny Hunt and Kathe Navarez were particularly helpful in those early years.  Some Australian nurseries with quarantine have assisted by bringing salvias into the country for me.  I have introduced round about 100 salvia species with various assistance.   With all the travelling I have a good network of salvia friends throughout the world.

Now I am quite old and my brain and memory works  slowly which is very annoying as I like to do things  fast.    I used to be a bother to Betsy Clebsch asking her many questions and now I can appreciate the difficulty it is to recall what I really do know.   I am hoping this website will answer the majority of questions you have and will keep adding to it where information is lacking.   If you have a salvia collection on your bucket list don’t leave it too long if you plan to get them from me and there is no better source in Australia.  In fact very few nurseries worldwide offer such a wide range generally because they are restricted by climate, knowledge or energy.