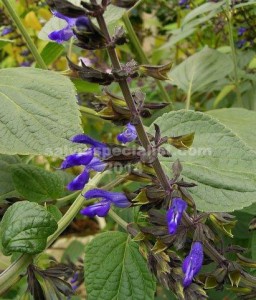 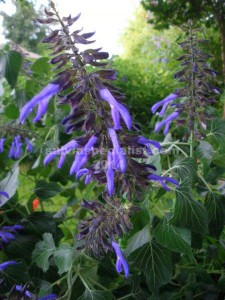 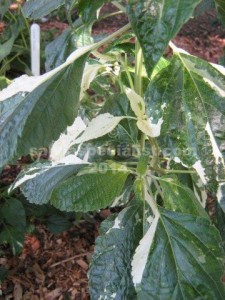 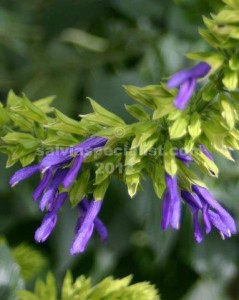 Mexicana is a popular species,  mostly because of its contrasting calyces and corollas.

Please note that the lime calyx does not always look this bright chartreuse as in this photo.   It would depend on the light etc.  Because I have the plants growing I can take a photo at the best time.

It is a  shrubby evergreen,  at least a metre high,  fairly frost and drought resistant and long flowering from summer into winter.  Originally there was mexicana major and mexicana minor.   Major seemed to have a shorter flowering season.  Mexicana minor  has a blackish calyx and smaller flower I prefer ‘Lolly’ so I don’t offer minor these days.

I introduced the first mexicana species into Australia being the one with the chartreuse calyx I called lime calyx, the flower was towards a royal blue and one with a dark calyx which I called ‘Lolly’ with a smoky blue flower relating to the name of the one I got the seed from.   Unfortunately the lime green one got called ‘Limelight’ which was its American name and correctly should not have been applied to another which was seed grown even though it looked the same.

Plant Growers Australia had a compact form of ‘Limelight’ which they called ‘Little Limelight’ and that name is correct.   From ‘Little Limelight’ I have a very chunky short plant I have been calling mexicana lime calyx compact.   I believe there is more market for shorter plants so it is the main mexicana I am offering these days.   I also offer mexicana ‘Lolly’ which will be about 2m with  a dark calyx and smoky dark blue flowers.  I am not so enthusiastic about the white flowered mexicana (smaller flowers) so often don’t have it in stock.

Mexicanas tend to seed quite a bit and obviously cross easily.

In the 1990′s,  there were quite a few being introduced to the Berkeley Botanic Gardens and other gardens around San Francisco.   There are not so many expeditions happening these days. However I was lucky enough to go on an expedition with the Universidad de Guadalajara near San Sebastián in Mexico in 2013.  We ate lunch by the wayside on Mt. Bufo in the middle of a patch of salvia mexicana.   The plants were very short,  about 1m high.  It was the dry season.

There is so much variety in the mexicana species,   there is even a variegated one which I don’t think has reached Australia.

Late last century I visited a New Zealand nursery who had  a white flowered mexicana.  I introduced this to Australia and also sent it to California.  I called it ‘Snowflake’ which wasn’t such a common name in salvias at that time.   Now there are all sorts of references to snow if the flower is white in a salvia.   This mexicana is particularly good flowering in the shade.

Note that the variegated salvia is not available in Australia.

I have grown some of the compact mexicana with the lime calyx this year.It starts to flower at about a metre and is a good plant.

I have also grown some ‘Ruth’ which has a light green calyx and purplish flowers.