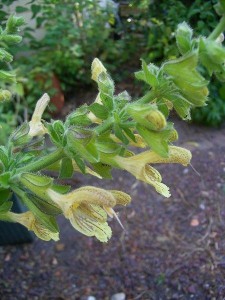 I have spent a lot of time studying the differences between nubicola and glutinosa.  they seem to be very closely related and I think are often misnamed in nurseries.   Nubicola comes from India and surrounds.   Glutinosa comes from Europe and surrounds.  They look and grow fairly similarly and I think glutinosa has circulated the most.  The name nubicola relates to the clouds and reflects the high elevation where it is found.

Both are winter dormant, and grow around a metre high with lemon/yellow flowers in summer and arrow shaped leaves.

They are tough plants and can be used in part shade.

Propagation is most likely by seed.

Out of glutinosa at present.as well as nubicola