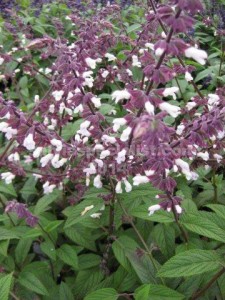 The origins of ‘Waverly’ are unknown but it is thought to be a hybrid.  This salvia is worth being in every garden.     It is a very useful salvia as it stays around a metre in height.  Foliage is dark green and the flowers pale mauve.   It flowers most of the year but could vary depending on when it was pruned.  If grown in the shade the flowers will be a lot paler.

An established plant could be slashed to the ground most times of the year or you could slash just half of the stems if you don’t want a bare patch.  Mid-summer could be a good time for slashing as it will recover and look very nice in autumn through winter.

‘Waverly’   suckers mildly but doesn’t race through the garden.   It can be used in part shade or sun.  It is not a  tender plant  to -2C at least.   Cuttings are easy to grow,  I doubt if it usually sets seed though ‘Phyllis’ Fancy’ is either a sport or a seedling from it but that happened in Santa Rosa..

‘Waverly’ is a must for every garden.  ‘Waverly has been in my garden for years and doesn’t usually get frosted athough there has been the odd -4C along the way.   Young plants would of course burn much quicker.