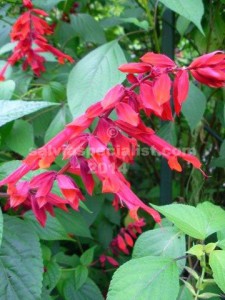 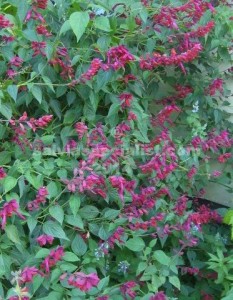 This is the plant which is the default banner on my website.   This first picture looks rather red but the banner is the right colour.

Van Houttii appears to be a form of splendens but is probably longer lived.  It is quite permanent in a warmish environment.  It has marvellous wine coloured flowers that everyone loves and flowers most of the year.  It grows to about 2m x 1m in time and is very useful for part shade.

This plant is very well known worldwide and has been sold for a long time.  It is not known where it originated.    These days and in sub tropical areas of Australia there are a big selection of similar splendens type salvias,  some of them get their own name.  There are a few variations of the spelling of the name.

In Australia there is a very slight variation called ‘Alan’s Maroon’.   It is hard to recognise the difference unless you are very familiar with them  but I think Alan’s maroon is a bit superior.

NOTE;  As at beginning of August I have some van Houttii but they are not in the best shape due to winter.   I am sure they will grow well and respond to warmth but please do not order if you are doubtful!