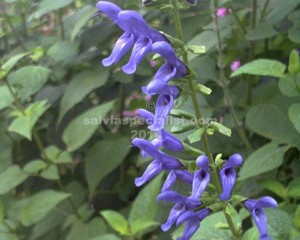 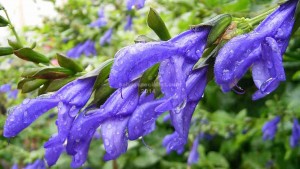 This species from moist parts of South America is widely available because it suckers and spreads rampantly. It is not good to plant it unless you know that beforehand! Unfortunately not everyone tells you.

It has been about in Australia since the time when gardeners felt there are not many blue plants and happily welcomed it. To make it worse the name got confused with patens, perhaps by nurserymen selling unnamed plants, but that is mostly cleared up now we have computers.

Guaranitica grows about 2m in height with attractive darkish green self supporting foliage which will die down in autumn or can be slashed. Flowers are a good royal blue. Cutting it down about Xmastime will lead to shorter plants and more flowers for its second burst of flowering than if you let it do its own thing. Otherwise it tends to flower heavily in spring and autumn with a break in between.

In the UK they call it Blue Ensign and possibly more names but they seem to be the same plant. I believe there are lots of variations in its homeland around Argentina, Brazil etc. ‘Black and Blue’ is a bred variation about half the height which I like in a confined place because it flowers solidly through all the warmer months.  It appears on this site under ‘Black and Blue’.   There is also now ‘Black and Bloom’ which seems purely a marketing exercise as it looks pretty much identical to ‘Black and Blue’.  The importers say it comes into flower earlier than ‘Black and Blue’ but if you want variation I would not buy both plants.   I am not going to stock ‘Black and Bloom’.

Guaranitica large form has the same lovely flowers but tends to be more shrubby – it does not run! –  with branches and flowers at different times in summer than the species. It also grows slower. The species comes up in spring, grows quite quickly and flowers. Frost doesn’t matter for the species as it will be underground but it can affect the large form a bit if you go less than -2C.

All guaraniticas like moisture but the species and ‘Black and Blue’ have tubers so can hold out a while. I have grown the species in really dry conditions where it will not spread so rapidly and flower very much shorter. ‘Argentine Skies’ is a pale blue variation with the same invasive bad habit but pretty if you know its habits and can plan it in to cope with it.    I have been growing Argentine Skies where it has been overwhelmed and smothered by other salvias and have almost lost it so I have to sort it out and take more care to keep it.   I have ‘Argentine Skies’ available as at spring 2022.

Variations of blue guaraniticas will be endless I think and there is even a red one bred in Argentina and now available in Australia under a different name..