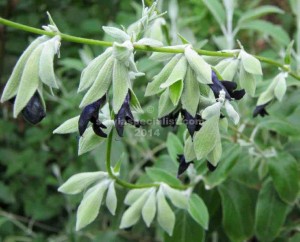 This salvia from Peru has been about in Australia pre 1990 which was when the salvia explosion began here. It always amazes people who see it for the first time. The foliage is grey but the flowers are the darkest blue possible, often looking black. People touch the stems near the flowers and find them very sticky but the whole plant is not sticky.

I have seen this plant a sturdy shrub about 2m high but only once. Usually people cut it so that it is around 1m in height. It is not a very fast grower in southern Australia like some salvia.

Discolor is moderately frost tolerant once established and is drought tolerant. It can be grown in sun or part shade. It is quite a sturdy plant which is a good thing because it is one most people would like to keep.

It is not difficult to grow from cuttings but doesn’t set seed for me. In warmer areas of Australia it does.

At present there is not another salvia like it in Australia but there are pictures of salvias in Mexico etc which have similar dark flowers.