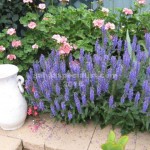 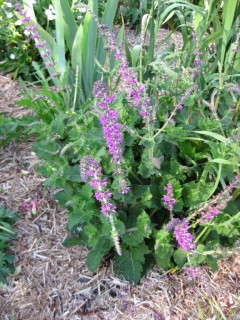 Superba is a name often interchanged with nemorosa.   In John Whittlesey’s  book The Plant Lover’s Guide to Salvias,  he classes them all as x sylvestris!  There are many variations.   It is very popular in Europe which is why it is worth breeding there.    The originals were an indigo blue,  but now there is a mid blue, ‘Blue Hills’ or ‘Blauhugel’ to give it its german name,  ‘White hills’,  ‘Rubin’ is pinkish wine coloured, etc.    They come in various heights and some also bloom at different times to the majority.

The photo above in the banner is of ‘East Friesland’.   This photo is a mass planting at Lambley Nursery.   This is one of the oldest and most well known.   ‘Caradonna’  is very similar but the stems are dark which I prefer.

They need cutting back after flowering for another flush.   In warmer weather they are quick to flower again.

They are easy enough to grow from cuttings.   If you grow from seed they will not necessarily be true to the original.   They self seed quite readily.

I don’t usually have large quantities (12 or so) of any one superba so it is good to ask before ordering more than a couple.    As at September I only have a few.  Try Lambley Perennials who specialise in this species.