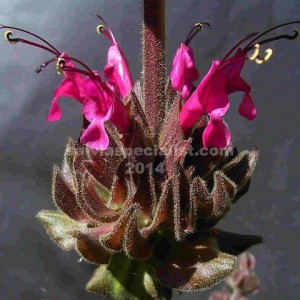 I love this Californian salvia for its lemon scented foliage.   Its flowers are quite unique also.  They have crumpled bracts and colourful calyces holding 2.5cm flowers in a whorl.  Whorls are widely spaced on the stems of 30cm or so.

There is a lot of variation with this plant.  The original flower was a cerise colour but now there are some pastels and yellow, although not available for sale in Australia as yet.

In Betsy Clebsch’s Californian garden she could grow spathacea outside her deer fence as they didn’t eat it.

Spathacea  could be a bit fussy to establish but once happy it could creep around a metre or so.   Most varieties would be less than a metre high including the flowering stems.

Spathacea would be cold and drought hardy enough for most of Australia once it is established but it won’t take much humidity.

As at end of April 2022 it is out of stock but I have just planted more which will be ready by spring at least.