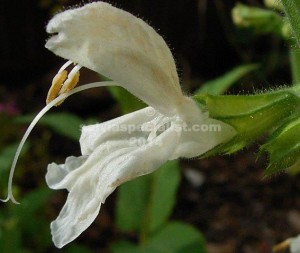 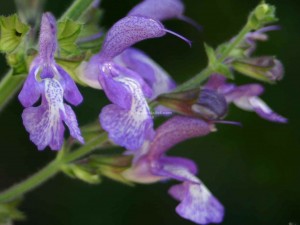 Don’t let the spelling of this plant put you off as it is one of the most useful salvias. It comes in a variety of spellings but I settled on this one as being the most popular. For pronunciation I just sound it out.

Forskaohlei has large round evergreen foliage which can get to be a ground cover in time as new stems come off horizontal roots. Starting in spring it puts up stems towards a metre of rich purple flowers. There is also a white form which is good but not as robust as the purple. Flower shade can vary a little also the foliage can vary a little in appearance.

Forskaohlei is from Greece, Turkey and roundabout that region. It is very cold tolerant and also very shade tolerant which makes it useful under trees etc but also grows in full sun. It is not tolerant to humidity or coastal semi tropics where it will probably only live a year or so. In most of Australia it will live indefinitely. If it is grown in a well watered garden it may want it always that way but if it self seeds somewhere very dry it will have smaller growth.

If you happen to investigate, forskaohlei grows new shoots along its stem but its main means of propagation is seed which could become prolific if you don’t cut the flowering stems down.

There are quite a few European salvias which grow in a similar manner with evergreen basal foliage and spikes of flowers in a few different colours.