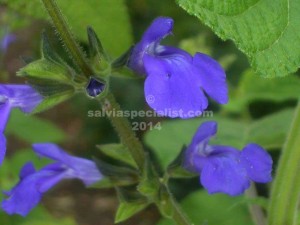 This plant caused some confusion for a while after its introduction to California from Guatemala, Central America etc. It was called short urica for a while but in fact seed grew towards 2m high. In the end it was decided that it was only short because it was introduced as a plant that didn’t seem to want to get tall, but its offspring did, and it didn’t seem to be the same plant as urica.

When I introduced it to Australia from seed I separated it from urica by giving it the above name. It is a lovely purplish blue with “greggii” type flowers whereas urica has narrow tubular flowers of an indigo blue. Urica foliage smells horrible to me.  I thought the name was related to urine but actually it is caterpillar!!!

It is a good back of the border type plant where it will add a blue touch for a long time.

It sets some seed and can also be grown by cutting.