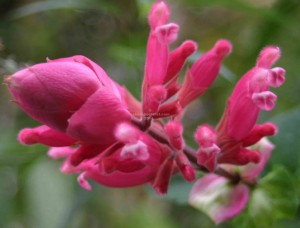 In Australia we are not entirely sure if what we call the species really is.  What I do know is that it is very likely to get mixed up with some of the other involucratas.   The Australian version of the species is distinctive if you have some of the others.   The main distinguishing thing is blooming period,  it doesn’t start until autumn with really HUGE fat buds.  (Wagneriana is very similar and that doesn’t bloom until autumn/winter either.)

(The most common involucrata  -  ‘Bethelii’ will start blooming before Xmas,  depending on when it was pruned, or not, and bloom through the summer and autumn or it could be almost year round in coastal warmth.)

If unpruned at all the species could be 2-3m high,   slashing to the ground at Xmastime could make it less than 2m at flowering.  It is evergreen but could frost burn under -2C.  Basically involucratas are less tender than some of the autumn/winter flowerers.

Involucrata species puts up multiple stems but  doesn’t invade rapidly or do anything unpleasant.

As at June 2022 I am out of stock but will send you some cuttings if you order other plants.