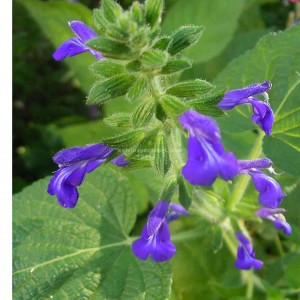 Urica is a smallish evergreen perennial about 1.5m high.  It has soft hairy foliage and  indigo blue flowers in warmer weather.  It comes from central America and Chiapas, Mexico.

Urica grows readily from cuttings.   I haven’t noticed it seeding but where it is a bit warmer it probably does.

I was in California when urica and ‘Blue Ribbon’ were newly on the scene.  They were regarded as the same plant but they didn’t grow similarly so I separated them when I introduced them to Australia.   One thing I do when working out what a specie is is to smell them and these two had different smells. It smells bad to me so I thought urica had something to do with urine.   It turns out that urica means caterpillar so I was way off!