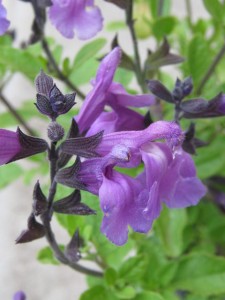 ‘Mauve  Maiden’ is a very pretty, free flowering plant which must have some microphylla in it.    The flowers are like greggii and microphyllas and the bush stays small and compact (50cm x 50cm).   It is evergreen.   We haven’t had it long enough to find out if there are any idiosyncracies though at first it seemed that it preferred a warmish and well drained winter.   I don’t expect it to be the ultra hardiest plant but it should be fine in regular conditions grown in sun or a little shade.

Pruning:   Ideal would probably be to cut a couple of stems to the base in mid-summer.  It flowers constantly so it is hard to cut some off.   If you have a good bushy plant you could often cut a few stems to the base if you have that much gardening time.   It will obviously recover quicker in warmer weather.

There are not any true blues or mauves in greggii or microphylla I believe.   Some people talk about blue greggii but it is usually a close species such as coahuilensis or muelleri which looks similar.

This is the first of what will be a stream of mauve flowered greggii/microphylla sort of plants.   It was released in Australia about 2012 as part of the Mesa range - ’Mesa Azure’.   Because of trademarking technicalities it can have different names.  The only way you can really protect a plant and keep it to yourself is to patent and hardly anyone in Australia besides Plant Growers Australia have patented salvias.