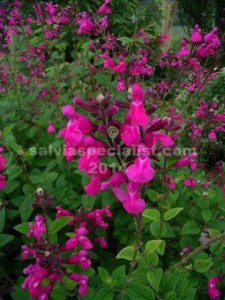 This plant should no doubt be called just ‘Joan’ as hybrids do not carry species names,  but I think it helpful to give it some indication of who it is closely related to.  Sometime before 1990 this plant had been kicking around in Australia passed from person to person without a name rather than in nurseries.   I called it ‘Joan’ to relate to Joan Eyles who passed it on to me.

‘Joan’ is a very accommodating evergreen, a metre high without much moisture, but could be 1.5m with plenty of food and water or crowding.   It has sugar pink flowers most of the time and is just plain hardy.  I don’t know what minus it would burn at but colder than minus 2.

‘Joan’ could be slashed to the ground in spring or earlier in frost free,  or half slashed and the rest left to carry on flowering and be slashed later.   ‘Joan’ enlarges her area but is not a ‘runner’ which gets out of control within a year.

Some of these same crosses happen in other countries but this plant has been taken physically to England.   ‘Mulberry Jam’ is a similar cross having happened in Betsy Clebsch’s garden in California and imported as a plant to Australia.   It is very slightly darker in flower and stems.   I have never let it have its head in my garden so not sure what it may do,  but I think it is not quite as good a plant as ‘Joan’.

‘Joan’ will grow in full sun or a fair bit of shade.  It is cold and drought tolerant.