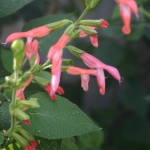 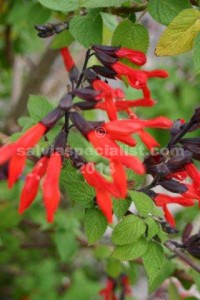 This is in the group of the largest salvia plants to 4m x 1-2m and could cover a big area if you never cut it back or it got frosted. It is quite stunning with large red flowers in a blackish calyx. The calyx won’t be as dark if grown in shade but it will still flower well wherever it is.

Sometimes this plant is prone to white fly which can be controlled by pulling the leaves off with lots of eggs underneath them. I put them carefully in the bin and spray them there with fly spray. The plant can be sprayed with Clensel a harmless spray which might not be so easily obtained or any other spray for white fly.

It is fairly frost tolerant to -2C but tender growth could burn. It flowers most in cooler months for a long time. Gesneriiflora is quick growing.

Correctly botanically it should not be called ‘Tequila’ but I have given up on this one as it is thus widely known. The species has a green calyx.

It seems to hybridise to pink quite often.   There are two variations of pink about in Australia.   The above being Pink Parfait.